But Would Your Grandma Use Tumblr?

Perhaps the most talked about story in social media or in tech over the last week or so is Yahoo’s $1.1 billion purchase of  hot social network/microblogging platform Tumblr. There are so many angles to this story. How is the team at Yahoo/Tumblr going to monetize the site more effectively? Will Yahoo’s lack of innovation with prior purchases Delicious and Flickr continue with Tumblr? Will Marissa Mayer make sure that doesn’t happen?

There are already signs that Yahoo is exploring creating paid posts in users’ Tumblr feeds similar to paid promotions on Facebook or sponsored tweets. This “Web In-Stream,” as it may be called, might have been in the works since long before Marissa started kicking the tires. You have to wonder what new strategy Yahoo might bring to the table, if any. 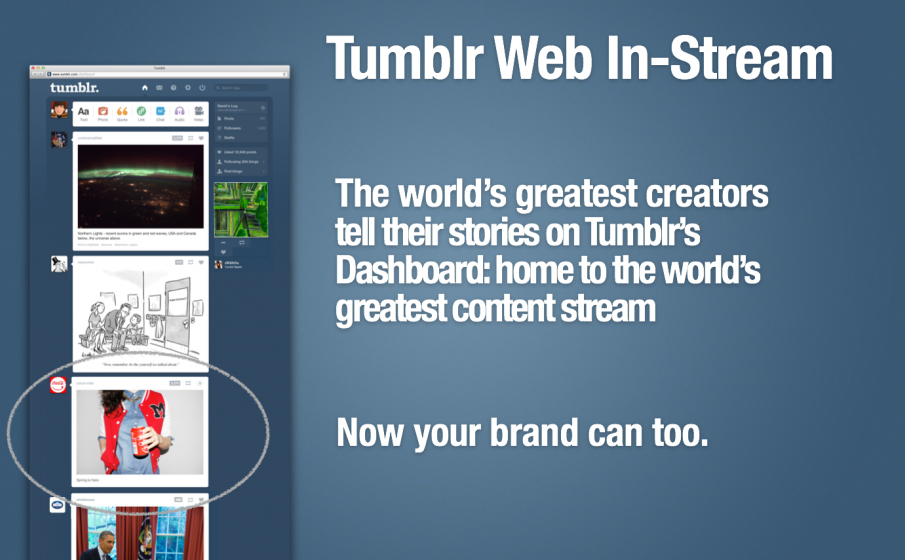 Is this what paid posts will look like in Tumblr?

Thought-leader Brian Solis over at the Altimeter Group seems to think that Mayer and her team will definitely be active participants in Tumblr’s direction. Their strategy may not be hands off, but it won’t be making huge changes either.
“I see Tumblr and a host of acquisitions that have yet to come into light bringing a sense of ‘guilt by association’ to Yahoo’s brand,” Solis said. “If Mayer and co. can infuse business expertise into the community without disrupting it, Yahoo and Tumblr will increase revenues that, according to industry forecasts, will help it recoup acquisition costs and coolness points starting in 2014.”
The key to this is to avoid losing the under 18 set who, according to Comscore, make up 22 percent of Tumblr’s users alone. Those between the age of 18 and 24 make up 26% of users. Grand total, nearly three quarters of Tumblr users are under 34.
This strikes me as very relevant given ongoing signs that people in those incredibly important age groups are actually losing interest in Facebook because there’s too much “drama” there and because it’s “less social.” Also, because of the huge number of grown-ups now on Facebook, teens are leaving for the relative anonymity of Instagram, Snapchat and that hopelessly noisy Twitter feed. Tumblr also owes much of its meteoric rise to this migration of millenials and people in their 20s and 30s.

But Will Grandma Use it?

A big part of what made Facebook reach IPO stage was the arrival of grandparents, aunts, uncles, teachers and yes, parents. Passing the “grandma test,” which pushed Facebook to over a billion users, is probably the key to Tumblr’s future. So, will Grandma use it? I tend to think not. At least not as many as those who joined Facebook, or at least not right away. Why? There are some inherent barriers. The idea of “blogging,” even when it is as simplified and dare I say enjoyable as Tumblr can make it, can still be highly intimidating to people who are less “computer savvy.” With Facebook, you sign up, add your friends, and then see what they are doing. It’s simple. With Tumblr, there is still the impression that you are actually starting a blog, which of course comes with perceived technical hurdles such as setting up a template/design for your “site.” Sometimes those perceived technical hurdles can be as deadly as real ones.
I also think that what someone uses Tumblr for is totally different than what they use Facebook for. To me, at the heart of Facebook are public updates about what friends are going through each day. This more linear “story-telling” way of utilizing social media doesn’t describe what I typically see in my  Tumblr feed. There I find a less linear, disconnected stream of art, humor, gifs and serious articles, with not as much focus on friends. Good luck getting most grandmas to sign up.
Of course, I have friends who think I’m bonkers when I describe Tumblr as “too difficult” for grandma.
“What? Tumblr’s deal is that it’s simple,” says Chris Trottier, “Ambassador of Happiness” at Hootsuite. (Yes that’s his actual title there. His opinions don’t represent Hootsuite). “You literally need to know nothing to use Tumblr. What technical thing do you possibly need to know with Tumblr? It’s just pick a photo and it’s shared. In fact, Tumblr’s better for sharing than Twitter is.”
Chris makes some sense here, but try telling that to one of your grandparents, who is just figuring out why they should use Facebook, or worse, how to use the mouse properly. I suppose it may be conceivable that a big group of older folks will start tumblogs soon. Yahoo and Tumblr have to do this in order to scale the business right? Then the concern is, will they lose those coveted young people who are looking for ways to escape older people? I’m not sure, but we’ll see some interesting answers in the years to come.

Erin is President & COO of DemandSphere. She has been working in technology, digital marketing and product for the past 15 years. She is a frequent speaker at industry events including PubCon, CMWorld, Found Conf and more. She also has also contributed to publications such as Search Engine Journal, Forbes, and others.