Build an Online Community by Stepping into the Unknown

Stepping outside the proverbial box and into the unknown helped me to build an online community around running and living your dream. Following my passion has inspired others and pushed the limits of what is considered normal.
Well, I’ve never been known to be normal. I tend to reach past that and push the envelope a bit. As I was running across the Golden Gate Bridge for the first time this past February, a little thought took flight in my head: Wouldn’t it be awesome to travel all over the country seeing our national treasures by running on them or past them? As my feet pounded the asphalt and my eyes took in the white capped ocean waves, my mind was racing with the possibilities. The running community might embrace this idea and I could build a social community to support me while I took on this monumental task. The idea grew and blossomed. Not only could I run over great big bridges or up the trails at Mt. Rushmore, I could run in half marathons across the United States. 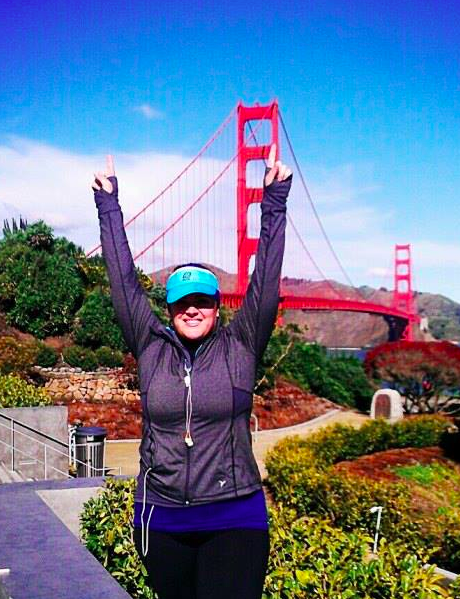 I let that sink in for a moment. That’s a lot of running. And a great big country to travel across to get to these destinations. Could I do it? Not only physically do it, but mentally as well. Could I build a community of people to support my dream of running across the US while writing along riverbanks? I knew I couldn’t do this under my company’s brand Orange Dragonfly Media, thus Dragonfly Running was born. I created a Facebook Page and a section on my blog devoted entirely to this journey and started to write through the planning stages then about where I was, what I was seeing, and the incredible people I met. Creating this community came as the natural result of sharing my story when I met someone in person or online through social media.
What I didn’t expect was the sheer amount of people who were following along because I inspired them to step out of normal and step into the unknown. I was living my life’s dream of writing while sitting beside a lake or overlooking the cliffs along the coast that I had just ran across. I was also living other people’s dreams who couldn’t take this adventure on their own.
Through Tweets, Facebook messages and Google+ Hangouts, I transported my community out of their lives and into mine for them to experience the world through my eyes. I’ve pushed my phone’s storage capacity twice with the sheer number of pictures I’ve taken that capture the moment in time where I was at both mentally and physically. I created content by living, by seeing, and by just being. It was an exhilarating feeling to create content that people were excited to read!
On May 1, I embarked on this journey of a lifetime. Over the next six months, I planned to run in 14 Half Marathons, which are 13.1 miles. This adventure would start out in Phoenix and travel up through California, along the Oregon Coast, to Washington, over the big skies of Montana, through the Badlands of South Dakota, to the lakes of Minnesota, stopping at the family farm in Indiana and then running in Chicago. At that point, I would fly to Ireland and run in a half marathon in Dublin and see the beautiful landscape of Great Britain. Once back stateside, I would run the Mall in Washington DC, with three half marathons in September; hitting Philadelphia, Montreal, and Rhode Island. Then off to run along the East Coast up in Maine all the way down to Atlanta and Florida. The last leg of this epic journey would cross the southern states running in the Bayous of Louisiana, to the hills of Austin, up to the mountains of Denver, ending 11/17/13 under the bright lights of the Strip in Las Vegas. Now, that’s a lot of running!

As with any journey, there are ups and downs. Some things you can’t plan for and are hard to get up from, but when you have a community to lift you up again, it makes it that much easier. When I visited Vancouver, my car was broken into and a lot of my gear was stolen.
The week before, during the Rock n Roll Portland Half Marathon my left leg started hurting pretty badly at Mile 4. At Mile 7 my ankle gave out and I went down screaming and in excoriating pain. I knew instantly that something was seriously wrong, what I didn’t know at the time was that during my fall I tore my Achilles Heel and created small tears along the tendon. I should have stopped running, but I didn’t. I ran the next 6 miles with tears streaming down my face and crossed the Finish Line feeling like I had failed. I wasn’t thinking rationally and thought people would be upset that I was injured and had run so slow.
I posted on Facebook apologizing for my poor performance. What I hadn’t expected was my Facebook community rallying around me the way they did. I still cringe when I think of that race. It hurt physically and pushed me mentally. If it wasn’t for my family and the social community I had built, I might have quit this journey that day.
It’s crazy to think that I built the Dragonfly Running community through my writing and social media, especially Facebook and Google+. I wasn’t afraid to be myself and to show raw emotion. By stepping into the unknown and out onto social media, I’ve met other runners who’ve let me stay in their spare rooms, bought me a meal or a tall pint of craft brew, or who high-fived me as I ran down the road. I’ve met people who heard my story and were shocked by what I was doing. What I love the most though, was hearing their stories. One by one, my community has grown. Sometimes it is doing things a little bit differently that creates the most impactful communities – and that was exactly what I had done. I stepped out of the comfort zone of my life and built a community to help me walk down a new path… into the unknown. Each day is a new adventure and I am ready to take the next step.
Kristi Trimmer is a Lifestyle Blogger, Tech Geek, soy-free eater, half marathon runner, craft brew and wine lover. You can reach her at DragonflyRunning.com or @dragonflytweet.