If you happen to work in advertising or marketing, then you probably know that we are in the midst of one of the biggest transformations ever to occur in the (at least) half-a-trillion dollar advertising industry. Although digital marketing is almost 20 years old now, the amount of money that companies globally spend online for advertising still hovers around only 14-20% of their overall ad budgets.
Advertisers are keen, however, to move more of their advertising budgets online, where they get more accountability and measurable results for the money they spend. This trend coincides with the ongoing digitalization of the remnant channels that are still considered to be “offline” – TV, radio, outdoor signage, and more. It’s all going digital and the opportunities for brands and agencies to create high impact, hyper-personalized interactive content combined with trackable metrics are limitless.
I personally believe that the next 5-10 years will see, conservatively, the digital percentage of ad budget reach at least 50% of all ad spending due to advances in media distribution technology, new mediums, younger CMOs and better tools with which marketers can create and manage campaigns online. Another whole industry has grown out of these larger trends: technology platforms designed to manage advertising and marketing. It is this advertising technology (commonly abbreviated as adtech, not to be confused with the ad:tech conference) – that I want to write about because I believe it represents a huge opportunity for new startups and entrepreneurs.
This is where things get interesting. Advertising, until recent years, has been a relatively stable industry, in terms of how the various players all relate. Advertisers worked with agencies and content production houses to reach consumers. And for a large majority of ongoing advertising and marketing, that’s still how it works. But we are starting to see new players emerge. Some of them want to disrupt agencies. Some of them want to be agencies. Some of them want to serve agencies and advertisers. Some want to build self-service platforms where anybody can play. It is becoming an extraordinarily crowded field.
One visualization that has been making the rounds over the last few months has been the Luma Display Advertising Technology Landscape map. As crazy as it seems, this only represents one channel — display ads. (People tend to forget this.) There are other channels and networks that overlap (paid search management is probably also well-represented by many of these companies), but the point is that there is already incredible diversity in the adtech industry. We can expect consolidation over the next few years, as well as hundreds of new players as the platform itself — the internet — continues to change and evolve. 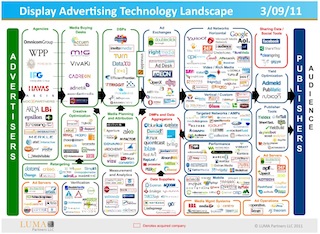 View a larger version of the Luma Display Advertising Technology Landscape.
What I wanted to do in this post was look at the overall adtech landscape from a different perspective: who is building all this stuff? Something that has stuck with me over my last five years in online advertising is that all this technology bears the distinct influence of the founders and management running the startups creating it. I’ve grouped these people into the categories that make the most sense to me. I’d love to hear feedback from people who see additional groups or have alternative ways of looking at this industry.

Let’s set the stage by looking at the organization that has existed as long as advertising has: agencies. Agencies, though often maligned, provide their customers with access to media companies, distribution to audiences, strategic expertise, and operational footwork for day-to-day campaign creation and execution. Many advertisers are so busy with their core businesses that they are unable to sustain a strategic, competitive advantage with regards to marketing against their competitors without support from at least one agency.
From an outsider’s perspective, especially in light of technology trends, agencies are a prime target for disruption. Quants and Hackers (whom I will introduce later), in particular, look at the vast budgets that advertisers spend and deduce, almost intuitively, that a LOT of money is likely being wasted on sloppy (or no) audience targeting, lack of transparency in reporting and analytics, and general operational inefficiencies.
Despite all that, most observers can’t honestly predict the demise of the agency anytime soon. At the end of the day, the model works for enough advertisers (particularly large ones) that the ROI is still there. In fact, the sheer workload involved in marketing along any channel is almost enough to guarantee that advertisers will outsource their ad ops to agencies for a long time to come.
Many of the larger agencies I have encountered have invested in their own technology. Some agencies have spun off or tried to transition into a technology company. In each of the following categories, I’ll look at why each group gets involved in adtech, as well as their strengths and weaknesses. For Agencies, this looks like:
Reasons to Build AdTech: To save money with better automation and reporting, gain a competitive edge and defend against outside disruptors
Strengths: Strong distribution in place with existing clients, recognized as thought leaders, cash on-hand, strong brand equity, deep operational expertise
Weaknesses: Lack of track record with building scalable products, unwillingness to invest in the 3-5 year lifecycles that product development demands, internal conflicts of interest

There is a strong temptation to look at the technological innovation that Wall Street delivers such as real-time, algorithmic and high-frequency trading tools and apply similar concepts to the world of online advertising. This sentiment was most popularly expressed by Google’s Chief Economist, Hal Varian, when he said “Marketing is the New Finance.”
Attempting to build rigorous data models and algorithmic tools to buy and sell ads has been a part of internet marketing since the earliest days of the web.
I think what we’re starting to see now though is more crossover between Finance and Marketing in terms of the tools and technologies that engineers in both fields are using. The downturn in the financial markets in 2008 may have had some influence on financial engineers moving to marketing, but my guess is that this is not a major factor.
Reasons Quants Build AdTech: Experience with power of automated markets, smell of blood in the water in the form of rampant inefficiencies
Strengths: Typically very strong technology, well-funded, strong presence in NYC and major advertising hubs creates natural sales opportunities
Weaknesses: Myopia with regards to the creative side of advertising and marketing, lack of operational experience in an client-agency context, intelligent systems are easy to marginalize if they lack simple utility, promise still greater than reality in many cases

Hustlers come from different backgrounds. Sometimes they come from a sales background in technology or even agencies, sometimes they are ex-consultants or MBAs and some of them come from an affiliate or performance marketing background. They have deep tactical expertise and have often built a set of tools to help them automate their own businesses. They have probably made some money (if they are good) in their previous businesses and can often bootstrap the first version of their products without any outside investment.
Reasons Hustlers Build AdTech: They have developed strong talents for marketing at scale and want to build products to sell to other marketers,
Strengths: Scrappy, know how to get to version 1.0 quickly, have a lot of contacts in their respective industries, deep tactical expertise, can survive at early stages on own resources, AWESOME at spotting new business models
Weaknesses: Lack of experience building scalable products, may underprice themselves out of existence

Until very recently, in advertising at least, hackers were more commonly referred to as engineers or programmers. They tended to work for agencies, hustlers and were also sometimes quants. Rarely did they run the show. We’re starting to see many more advertising-focused startups founded and run by hackers. Ginzametrics is certainly in this group.
Most hacker-run adtech startups that I know about are run by hackers who also have some sort of experience as an agency or hustler. I’ve talked with quite a few people who majored in computer science but built up six figure incomes in college running affiliate or lead-gen operations. Others were lead engineers at agencies or other advertising startups and realized that the only major thing standing between them and better career prospects was, in MBA-speak, the “value chain” (eg. direct access to customers).
Reasons Hackers Build AdTech: See opportunities for better automation and more efficiency; to scale existing, inefficient business models; to disrupt agencies or existing products with fat margins and low quality or weak competitive advantages
Strengths: Very good at building scalable products, sometimes have good product instincts, able to iterate and execute quickly, know how to do a lot on very little, can move faster than other startups to take advantage of new technology trends
Weaknesses: Historical lack of access to customers, too much focus on superiority of product with a lack of focus on on sales and marketing

As proud as I am to be part of a hacker-run startup, I am also very pragmatic about the competitive landscape. There are wicked smart people in every category, and we should all be learning from each other. I personally believe that the startups that stand the best chances of success are the ones who will be able to create the optimal mix of personality traits in their companies.
If you’re at a Quant startup, you should be paying close attention to your user behavior and really understand your customers. The biggest temptation is probably to go all astronaut on your product and deliver hardcore technology that nobody knows how to use.
If you’re at an Agency startup, you probably need to get better at iterating quickly on your product, focus on creating a simplified user experience and prepare, financially and mentally, for a long product lifecycle that could take years to mature.
If you’re a Hustler startup, it probably makes sense to learn from the Hackers and Agencies. The Agencies will show you how to get branding and distribution and the Hackers will be good at building products that scale well.
If you’re at a Hacker startup, pay attention to the Agencies. You’re going to have to figure out how to either fit in their world or disrupt it so hard that it becomes your world. Learn from the Hustlers as well. Those guys know how to make money and are so good at spotting business models that they make a killing before the rest of the industry can begin to catch up. Also, if you’re at a Hacker startup doing anything related to Display ads, online video or ad optimization, you definitely need to pay attention to the Quants, because they are probably already light years ahead of you. The opportunity for you will be to either plug into their platforms or commoditize, simplify and scale out to new markets.
Have feedback or ideas on this post? Email us at hello@ginzametrics.com.