I admit, as someone who loves popular news stories and content, I get a little jealous when I see a controversial post on a blog. These posts, with their heavy amount of comments and social shares, are a content marketer’s dream. They mean more people clicking around your site, noticing what you do and perhaps even helping your bottom line, whether it be through selling a product or loading ads.
Occurring in many a viral post is the “flame war.” Urban Dictionary defines it as “a heated argument between two individuals, that results in those involved posting personal attacks on each other during or instead of debating the topic at hand.” After having been in a few of these myself over the years, it has colored my perspective on commenting in general.

Why “Flame Wars” have a Bad Name

If I have enough endurance to make it through a blog post to the comment section (darn you, ADHD!), I tend to see that area as a flame war waiting to happen. The same goes for Facebook, Reddit, forums or any other place on the Internet where comments live.
In some ways it’s an unhealthy outlook, because it doesn’t easily encourage engagement; however, “lurkers” like me make up a majority of folks perusing these sites. Once we’ve been burned in a highly emotional “discussion,” we tend not to want to go through it again.

Don’t get me wrong. Some people live for flame wars and jump right in. They are often “trolls” who enjoy getting involved in these discussions and actually sparking anger or emotion in general among participants. There are also people who are able to join in without emotionally investing themselves in the conversation. Others just let the emotion take them and go for it.

“It’s kind of like the all-you-can-eat buffet and desert bar at Bellagio,” said longtime Reddit user and Palo Alto entrepreneur Francisco Cruz. “You are super into it when it’s going down but after you’re done it feels shameful. You just wasted several hours with faceless people over the Internet.”

As a potential commenter, I try to avoid getting involved in discussions that might involve religion, politics, or really any possible subject. There are tens of thousand of topics that could actually start a flame war. It’s not about the topic. It’s about people and their passions.

Why a Flame War Can be a Content Marketer’s Friend

As a content marketer, it’s your job to consider heading the exact opposite direction. You may want to run right into the hurricane if you are creating content, rather than than run from it like many a reader does. Here are some things to think about as you travel down this path.
Pick Controversial topics.
Controversy is in the eye of the beholder. It’s not just politics or religion that can be controversial. This Valleywag post is a good example. What may seem like a banal topic to the outside world (the quality of life in San Francisco’s Mission District), actually results in a hotbed of insane, vitriolic back and forth in the comment section. Two different friends have shared it with me since its publication, and they don’t know each other. Why did it go viral? The author chose his topic well.
Write Controversially?
Let’s be honest here. There were elements of the writer’s style in the Valleywag article that could be considered inflammatory. He makes a broad attack against younger folks moving to San Francisco, and how their inexperience, partying and lack of substance are harming the city’s way of life.
In my opinion, he doesn’t even make his case very well. It really just seems to be a long diatribe with various personal stories about how annoying younger people are to him. I venture to say that it might have been intended to be this inflammatory, so as to spark more conversation and social shares. This is a real technique that some people use in order to get attention. If you wish to try it, I say go for it, but be prepared to be called out on it or criticized for it.
Past Hot Topics
This one is something you should be doing on an ongoing basis anyway. Take a look at what you’ve written about in the past and advance it forward. Is there an update to a previous story on your site that can be delivered to your audience? Are there related subjects that add to the conversation and can be explored on your site?
Look at Your Tools: What’s Trending?

We’ve told you about some ideas that can help with this. Use tools to figure out the subjects and conversations that are trending around the world and in your area. The best way to truly understand the most popular subjects being discussed by your target audience is to become a member of the group. Join the forums that you typically search for content ideas. Become a part of the conversation. Make friends and meet people. It will allow the content creation process to become more natural.

People Fight Over the Darnedest Things

Here’s a final example of content that grows out of these online battles. As I mentioned before, there’s really no limit to what people will complain about. One of the biggest flame wars I’ve seen recently surrounds the E3 Video Gaming Conference, where Sony’s plans for its Playstation 4 console were thought by many to be superior to plans from Microsoft for it’s Xbox One.
Tens of thousands of people expressed their opinons on this “life or death” matter. They commented all over the place, from forums to social media sites to blogs. One site even collected reactions to the drama in gif form. Memes such as the one below sprouted up through the Internet cracks as they sometimes do in reaction to these events and found their way into posts all over the web. 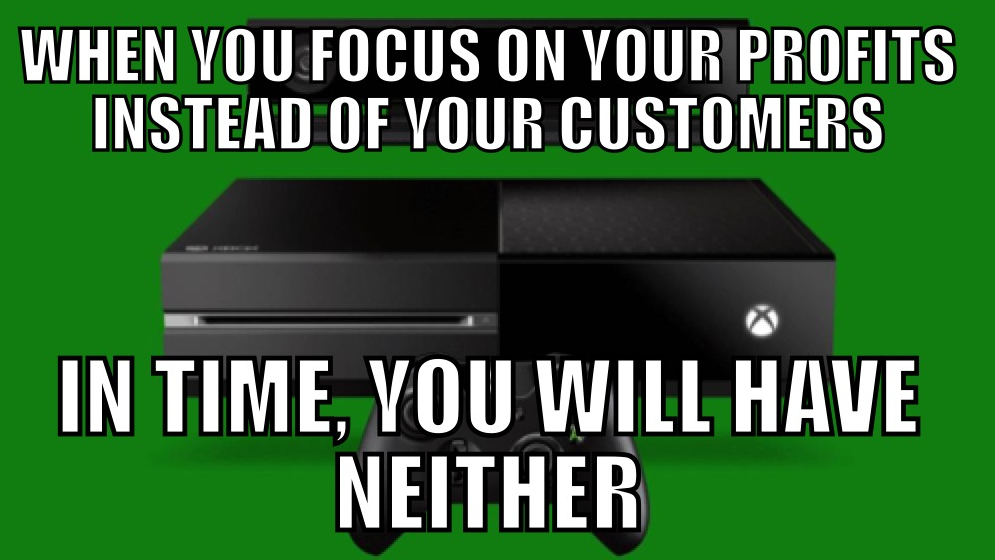 It is inevitable that as these flame wars take on a life of their own, content creators jump on the bandwagon in order to get a piece of the action for their own sites. It’s certainly worth incorporating this type of work into your strategy as you continue to create content as well.